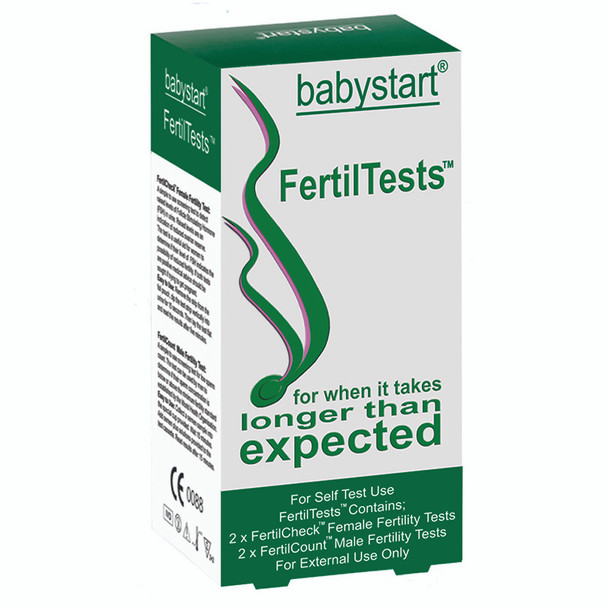 For Self Test Use FertilTests contains:

This kit measures sperm count in men and the sex hormone FSH in women.

The babystart¨ FertilTests fertility screening test for both men and women, measures sperm count in men and the sex hormone FSH in women. This is a combination twin test pack for couples to share in the privacy of their own home. For the women there is the babystart¨ FertilCheck Female Fertility screening test for women which measures the sex hormone that is an indicator of a their biological fertility clock.

A woman’s fertility starts to decline after she gets to 30 and the decline gradually accelerates until she gets to menopause. This reduction in fertility is reflected in a similar gradual increase in the the hormone FSH (follicle stimulating hormone). Rising levels of FSH tend to be associated with reduced fertility. The FSH hormone can also be raised in women with irregular periods and without doubt will steadily rise as a woman gets older. As menopause approaches the levels get particularly high and act as an early warning system for peri-menopause. The babystart¨ FertilCheck Female Fertility home diagnostic screening test is a rapid test of FSH concentration in urine. The kit contains two ECOstripª Female Fertility tests and if both test results are positive it is an indicator of reduced fertility. The test is greater than 99% accurate. With this test a negative result is going to be good news although its not proof of fertility. A positive test result suggests that fertility is reduced and we recommend that a woman see her doctor to discuss the results and perhaps have more tests done.

For the man the babystart¨ FertilCount Male Fertility test is a rapid diagnostic test of sperm concentration in semen. Sperm count is widely recognised as the major indicator of the fertility in men. There is a one test kit and a two test kit. The World Health Organisation has defined a man’s fertility on the basis of the concentration of sperm in semen with the cut off point being set at 15 million sperm per mL of sperm. The babystart¨ FertilCount Male Fertility test kits are a unique home test that will tell you if a man’s sperm concentration is greater or less than the WHO cut off point. A positive result is going to be good news although its not proof of fertility. A negative result suggests then man should see his doctor, which is not all bad news, because it does at least save the a couple months of futile trying for a baby.

product is sent in discreet packaging direct from Ireland

MSRP: €49.99
Now: €34.99
Was: €49.99
40% of difficulties in trying to conceive are due to male fertility issues, and specifically poor sperm quality, however it can be inconvenient and embarassing to visit a hospital or fertility clinic...
Add to Cart

MSRP: €49.99
Now: €34.99
Was: €49.99
40% of difficulties in trying to conceive are due to male fertility issues, and specifically poor sperm quality, however it can be inconvenient and embarassing to visit a hospital or fertility clinic...
Add to Cart

MSRP: €12.99
Now: €6.99
Was: €12.99
This Pregnancy Test has been specifically designed for couples trying for a baby who tend to use a high volume of pregnancy tests and don’t want to spend a fortune on single top brand tests,...
Add to Cart

MSRP: €12.99
Now: €6.99
Was: €12.99
The Core Test Ovulation Test strip is most economical way to test for ovulation. The test strip will detect your LH (Luteinizing Hormone) Surge which is when you are most fertile. The test is as...
Add to Cart

MSRP: €39.99
Now: €31.99
Was: €39.99
Clearblue Digital Ovulation Test with Dual Hormone Indicator typically identifies 4 fertile days, twice as many as any other ovulation test, increasing your window of opportunity to get pregnant...
Add to Cart