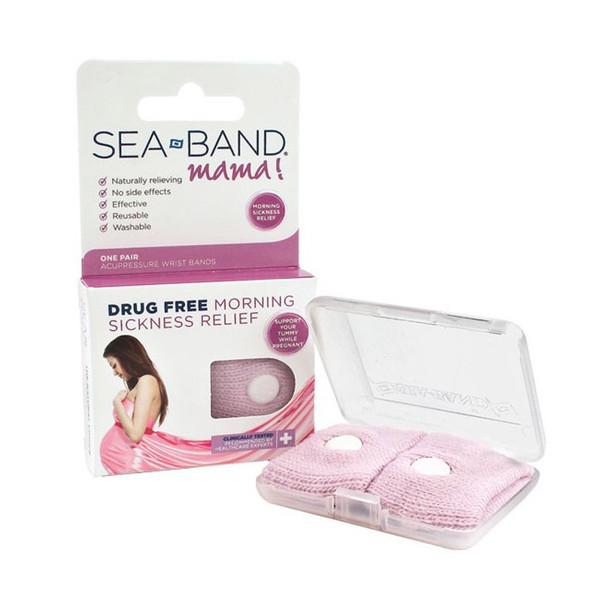 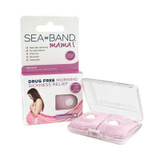 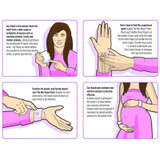 The new Sea-Band Mama! Range has been specially created to help soothe and calm your tummy during your pregnancy so that you can start enjoying this special time again.

Get a Helping Hand to Relieve Your Morning Sickness

Many expectant mothers suffer from morning sickness and most find their symptoms ease at around week 14, but for an unlucky few nausea and vomiting may continue throughout the pregnancy. Scientific studies have proved that one of the most effective drug-free treatments is Acupressure on the P6 (Nei-Kuan) point between the two central tendons near the wrist.

In the UK, acupressure was first scientifically proven useful for this condition by the late Professor John Dundee from Queens University, Belfast. An Italian study has also found that morning sickness was reduced in 70% of women who used Sea-Bands.

The plastic stud on Sea-Bands applies continuous pressure on each wrist preventing or relieving the feeling of nausea.

How to Position Your Sea-Bands

Here’s how to find the acupressure point (called The Nei-Kuan Point). Place your middle three fingers on the inside of your wrist with the edge of the third finger just below the first wrist crease. The Nei-Kuan point is located underneath your first (index) finger in-between the two wrist tendons.

Position the plastic stud facing inward over The Nei-Kuan Point. Repeat for your other wrist. One band must be worn on each wrist to be e!ective.

Sea-Band takes between two and five minutes to become effective. A better result is achieved if the band is in place before your nausea commences. Greater relief can be gained if necessary by applying extra pressure to the plastic stud.

All Orders delivered for just €4.99 To anywhere in Ireland and Northern Ireland

Angelsounds
€42.99
€34.99
Can’t wait to hear that little heartbeat? This portable fetal doppler detects the fetal heart rate quickly, from about 12-16 weeks’ gestation or later, and it's safe and simple to use...
Add to Cart
Sale

Dreamgenii
€64.99
€49.99
The accessory every mum-to-be needs, this Dreamgenii® Pregnancy Pillow helps while sleeping, feeding and giving support before and after baby. Designed to be used from 20 weeks on, the Dreamgenii...
Add to Cart
Sale

Medicare
€42.99
€34.99
Medicare has created the perfect support belt to help ease the strain of pregnancy while relieving back, abdomen and leg discomfort. Designed to offer many benefits including improved blood flow and...
Options
Sale

Carriwell
€16.99
€15.99
The further along in your pregnancy you are, the more support your body needs. The Carriwell Seamless Maternity Support Band is uniquely designed for discreet and comfortable support of your back and...
Options
Sale

Bio Oil
€24.95
€17.99
Bio-Oil is a specialist skincare oil that helps improve the appearance of scars, stretch marks and uneven skin tone. It is also effective for ageing and dehydrated skin. The Bio-Oil skincare...
Add to Cart
Sale

Angelsounds
€49.99
€39.99
The Angelsounds Fetal Doppler is an easy-to-use doppler for expectant mothers to hear their baby's heartbeat from 12-16 weeks as well as kicks hiccups and blows, all from the comfort of your own home...
Add to Cart
Sale

Jumper
€139.99
€89.99
The Fetal Doppler Large LCD Display - Hospital Grade is loud, sleek, and by far the best fetal doppler on the market. Detecting a fetal heartbeat from 12-16 weeks, there couldn't be a better time to...
Add to Cart